Sydnee Wilke completed her undergraduate degree from The Ohio State University with a double major in International Studies and Russian in 2020. After completing a study abroad in Moscow and writing her undergraduate thesis on Russia, she wanted to continue and expand her studies of the area. She’s currently working towards a Master of Arts in Eurasian Russian and East European Studies at Georgetown University’s Center for Eurasian, Russian and East European Studies. Her research interests include soft power diplomacy, the Caucasus, and the Baltics. She hopes to one day pursue a career as a U.S. Foreign Service Officer or in the field of international development.

Right now, what would you say is your career goal or next career step? When did you decide to pursue this career track? Finally, where did Russian or Slavic studies fit in?

I have always been really interested in other countries and other languages. When I was younger, I went to DC and I saw all the embassies and found that fascinating, so from then on, I had the dream career goal of being a US diplomat, such as a foreign service officer with the US Department of State.

I went into college with that goal in mind and I decided to major in International Studies at Ohio State. Since I chose to do the International Studies Bachelor of Arts, I found out that I needed to minor in a foreign language, and so this where Russian comes in. I had no idea what language I wanted to choose but I knew I didn't want to do something I had already gotten the opportunity to study. I wanted something different, and I was speaking with an advisor and she said to me “well, if you think about long term career goals, the people who spoke Russian in the State Department were around for the Cold War era, and a lot of them are retiring.”

I decided to begin studying Russian and I loved my first semester professor so much I ended up taking her for two more semesters. Her passion for her country and its culture was really what inspired to keep learning Russian. I enjoyed it so much I turned it into a double major. 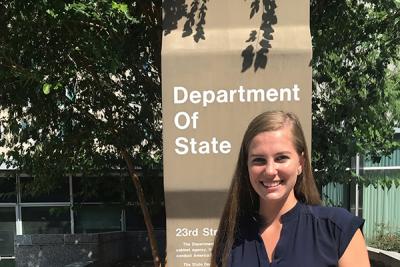 Was grad school always in your plans?

Not always but after studying Russian for four years, I realized that if I want to use Russian in my career, I'm going to need to keep developing my language skills. Going to Russia and learning Russian there is always probably the best option, but grad school was something that I could do right now in America, especially due to the pandemic, but it seemed like the logical next step because I knew I needed to develop my language skills in order to use it in my career.

What were some of the OSU or Slavic Department resources that you found most helpful while you were at Ohio State?

I think one of the things that specifically sticks out is Russian table.

At first when I was younger, I didn't attend Russian table very often. I participated in a lot more events like Kapustnik. I was hesitant about Russian table because I was kind of nervous to use my Russian in a setting with other people, but then during my senior year I started going every week and it actually turned out to be really fun as well as beneficial. I got some of my other classmates and friends to come along and it was so much more relaxed than I assumed it would be. Russian table was very helpful because in the classroom you get to speak Russian, but you're not trying to have a full-on conversation every single day. Trying to have a conversation and express meaning and understanding in a more informal setting was actually very, very beneficial to me.

I think, just in general, the course offerings in the Slavic Department are really unique. There was a lot of variety, such as Russian history and culture, Russian film, and the Russian spy class. I got to learn a lot about Russia in a lot of different disciplines, which really helped me when I did go to Russia because I had some cultural, historical, political, and language knowledge. All that really benefited me and made me a more well-rounded student and really prepared me for grad school.

In this day and age, when people look at the humanities they may ask “What's the point?” “Why am I learning this” or “Why wouldn't I just get a professional degree”? As someone who’s pursuing a career outside academia, what do you think about this?

Yes, it's definitely one of those things that people don't take into consideration, unless they're very serious about area studies are working in the region and that's why I really like the graduate program I’m in as well it's because they offer courses on the Caucasus, Central Asia, places I’ve not really gotten a lot of exposure to, and now I’m getting to focus on their history and their culture, so I will have a more well-rounded view of everything in the region.

You mentioned going on a study abroad trip to Russia. Outside of the courses in the Russian degree curriculum, what impact did study abroad or internships have on how you were thinking about your career? Do you think any of these helped to give you a more competitive graduate school application?

Study abroad was very important in helping me decide whether or not the foreign service was something I could actually do because I'd never done any substantial travel outside of the US. A couple vacations here and there, but nothing major. This was my first time going to a country where I did not have the best grasp or understanding of the language and I had to use public transportation, order food at restaurants, go shopping, and a lot of other things that you would have to do if you lived there full time. At first it was challenging, and I had my fair share of struggles, however, by the end I really could view myself living in Moscow. I was like “wow I can't wait to get back” as opposed to “wow I can't wait to go home”. I couldn't wait until I got to go to Russia again.

Almost everybody in my graduate program has gotten the opportunity to visit Russia or one of the countries of the Caucasus or Central Asia.

A lot of the job applications I’ve seen actually ask “how long have you been abroad?”, so I'm now trying to get more experience abroad. While at Ohio State I did virtual internships throughout my career. I did two internships with the US Department of State and one with EducationUSA-Ukraine. I ended up really, really enjoying them and they did make me a more competitive applicant, at least for grad school.  Although I was not located in a place that had all the opportunities of a city like Washington DC, I made the most of opportunities online or things I could do virtually.

Last question. You kind of touched on it already, but if you could recommend one course for somebody to take in our department and one activity for them to participate in what would those be? Or top three if that's easier.

Yeah, I think top three would be good. Russian Culture and Politics (Russian 3350) was very eye opening because we talked a lot about the end of the Soviet Union as well as when and how Putin came to power. There was a lot of background information I didn't have about a lot of the current events that were happening, and that was early in my career, so it was probably around 2017 that I took that class. This was right around the time Russian involvement in the election and Russian politics in general were moving to the forefront again, so having that class was very beneficial.

I really enjoyed the Russian film course (Russian 340.01/.99) because there was a lot of freedom in that we got to choose what we watched and then do projects on movies we were interested in. I got to learn a lot about many classic cultural films, so when I talked to Russians and I mention that I've seen Irony of Fate, they were impressed! I think that these films also give a really good insight into life in Russia, especially the Soviet period.

The spy course (Russian 3480.01/.99) was really fun. It was a good combination of history, film, and culture. I think it really helps students identify cultural stereotypes in the media and think critically about them, so you don't just like take them at face value. That course really helps you reevaluate why we believe some of the things we do. It really helps dispel stereotypes and that's incredibly important in diplomacy. It’s a great course for Russian studies students, as well as other students who don't know much about Russia but want to learn more about the facts and that spy films are not the way to find out about Russia!

For activities, I guess I’ll just give the two main ones that I really liked. Kapustnik and Russian table.

Kapustnik was always fun. I participated or attended almost every single semester I was at Ohio State. It makes the department feel more close-knit and like we're all working towards similar goals. It’s a great way to make friends too!

I actually still attend Russian table virtually with Dr. Myers and enjoy getting to catch up with people from my classes as well as meet new students at Ohio State. Russian table is a great way to practice your language skills. Having that extra time outside of the classroom where there's no pressure of grades was very helpful to the development of my language skills.