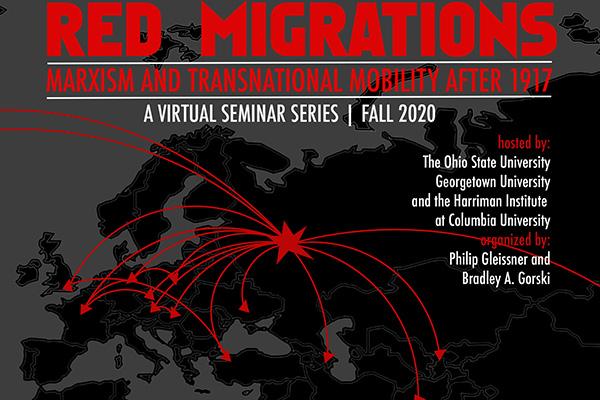 For more information on the symposium, including a link to RSVP, please visit the event website. The event keynote is generously hosted by the Harriman Institute at Columbia University.

Red Migrations: Marxism and Transnational Mobility after 1917 is a research project organized by Bradley Gorski (Georgetown University) and Philip Gleissner (The Ohio State University). The project explores the many ways in which Marxism and Soviet culture enabled, facilitated, and moderated global mobility, shaping a transnational socialist communities. In the fall of 2020, we are convening a series of virtual seminars, where scholars of 20th century culture will workshop their contributions to a volume on this topic.

Together with a new political, social, and cultural order, the Russian Revolution brought about a new spatial order – and with it new patterns, motivations, and impacts of migration. Traditionally, the transnational aftermath of 1917 has been studied primarily through the involuntary migrations of those in opposition to the new Soviet system—the white émigrés. Though the post-revolutionary diasporas were politically and socially diverse, a Cold War lens has often spotlighted the literary production, patterns of cultural preservation, modes of assimilation, and political ambitions of these émigrés that could be cast in opposition to the revolutionary project. Largely understudied remain the “red migrations,” or the various multidirectional and multilateral transnational movements of leftist thinkers, artists, and writers. From avant-garde poets like David Burliuk, to Marxist theoreticians like Gyorgy Lukacs, to “fellow travelers” like Paul Robeson, leftists of all stripes were inspired and at times impelled by the Soviet revolution to cross borders. The resulting circulation of ideas, aesthetic forms, as well as individuals not only contributed enormously to the ferment of creative activity in the early Soviet years, but also deeply informed international leftist aesthetic and political practice throughout the twentieth century. The robust and diverse transnational networks created by these circulations are at the center of the proposed volume, Red Migrations: Marxism and Transnational Mobility after 1917.

As the first volume focusing specifically on these networks, Red Migrations highlights the global resonance of the 1917 revolution and brings anti-colonialism, black leftism, and feminism into conversation with early Soviet cultural history. Beyond offering new insights into the global leftist project, Red Migrations adds much needed complexity to traditional emigre studies by emphasizing the porousness of boundaries between east and west, between émigrés and leftists, and between “Western” Marxism and “Soviet” Marxism as theoretical traditions. Furthermore, the volume interrogates the contours of the specific transnational condition created by Marxism in the twentieth century: How did socialist ideology and cultural praxis facilitate negotiations between cultural and political spaces? How did these spaces transform through transnational encounters as Soviet culture came into contact with both sympathetic and hostile cultures throughout the rest of the world? What cultural and political alternatives took shape in these transnational experiences? Finally, Red Migrations breaks new ground in the study of cultural flows in the 20th century. Considering both voluntary and forced relocation, officially sanctioned and irregular border crossings, Red Migrations provides a complex and nuanced picture of post-1917 transnationalism while challenging the limitations of current approaches to assimilation and cultural exchange.